To get ready for my cross-Olympics hike, I packaged all my meals and double-checked my equipment list. 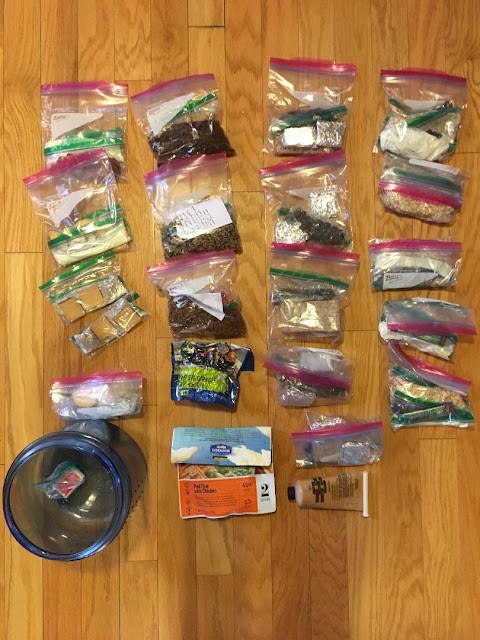 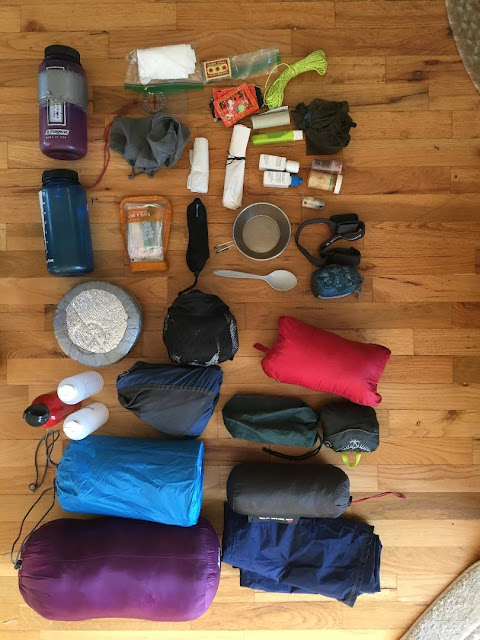 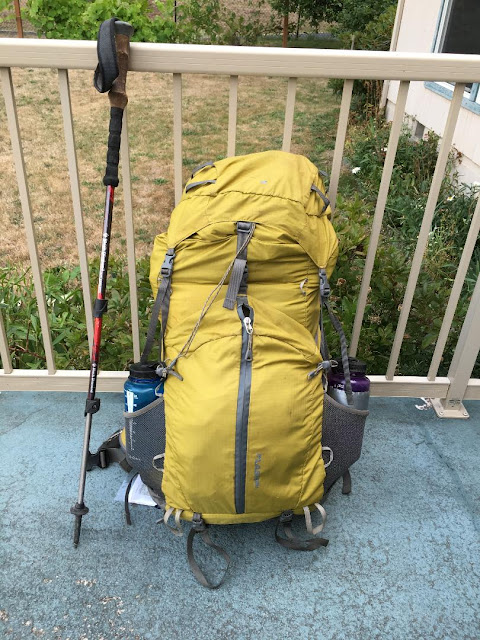 On Wednesday, August 21, I began my hike with a car drop-off. Guy and I drove our cars to the Duckabush River trailhead near Brinnon. I left my car there and Guy drove me around the Olympic peninsula to the Quinault Ranger Station. I got my permit ($38, ouch!), then Guy dropped me at the Graves Creek trailhead. It was raining while drove through Aberdeen, but it eased up when I started down the trail at 3:00 pm.

My goal for this hike was to keep my average distance at an average of 6.5 miles per day. In past hikes, I’ve become completely exhausted because I overdid it. So my first day I intended to hike to O’Neill Camp, about 6 miles. But by 6:00, I was so tired that I grabbed a campsite at around 5 miles. I finished setting up camp just before the rain began, so I was able to keep dry under the tarp. It got dark a little after 8 pm, so I crawled into my sleeping bag and listened to a short story by D.H. Lawrence, “Shades of Spring.” Before I left, I loaded a number of audiobooks and music files on my phone.

The next morning I sat up in my sleeping bag, did Morning Prayer and made breakfast before packing up and starting on the trail a little before 9am. This is a lovely trail that goes through numerous open glades with bigleaf maple trees dotted here and there. I tried to take a rest break every thirty minutes so I kept up my energy, and this seemed to work pretty well.Had lunch in a sunny spot by their river and dozed in the sunshine.

I arrived at Enchanted Valley at 3 pm. I took a good long rest, then explored the meadow and found a campsite up under the big spruce trees. I made a watercolor along the River. There were a lot of people there, probably 6 or 7 campsites occupied. A woman horse packer brought a 6-horse pack train through with supplies for the trail crew working nearby.

Made dinner, settled in for the night, solved a New York Times crossword puzzle and listened to “The Withered Arm,” by Thomas Hardy.

The third morning, I got on the trail by 8:05. I wanted to get an early start because I had a challenging day ahead of me: a climb of 2,400 feet up Anderson Pass. I labored up the trail and made pretty good progress. By noon I was nearly to the pass, so I stopped and had lunch at a switchback in the trail. Made it to the pass at 1:35 without too much sweat. There was a crowd of six backpackers talking with the ranger. I listened for a bit, then started downhill.

Reached the turnoff to the LaCrosse trail at 3:15, found a place to camp and laid out my gear. It felt so good lying there in the shade with my legs glowing inside the sleeping bag as I rested with my back against a tree. Took a brief nap and felt quite rested. Stopping at 3 pm seems about right because it gives my body enough recovery for the next day’s hiking.

On the fourth day, My plan was to hike over LaCrosse Pass, a climb of about 2,000 feet, a pretty good challenge. Started off with morning prayer and breakfast, as usual. On this trip I brought ¾ cup of oatmeal for every breakfast. Turns out that’s a little too much for me, but I usually managed to get it down. In addition to the oatmeal, I bring dried blueberries, a small baggies of brown sugar, and a couple tablespoons of whole dried milk. It makes a filling and tasty breakfast.

I started up the switchbacks to LaCrosse Pass at 8:25. It was cloudy and muggy as I made my way slowly up the trail. Lots of rest breaks. After a long time, the trail broke out into alpine meadows, with beautiful views of Mount LaCrosse to the west. The clouds were moving in, catching on the tops of the peaks and shrouding them.

Got to the pass at 11:45, just before it started to rain. Put on my rain gear and the pack’s rain cover and started downhill. Found a dry place to eat lunch under some thick trees, but it was too wet and cold to rest very long. Kept going down the switchbacks, and after a half hour it quit raining so I stripped off the clammy rain gear.

There were about 30 switchbacks going down 3,000 feet. The bottoms of my feet burned and my thighs ached, even though I took many small breaks. Finally I made it to the Duckabush trail at 2:35. Took a good long break and started down the Duckabush trail. I met six teenage girls probably 14-16 years old followed by their three adult sponsors, on their way to Upper Duckabush Camp.

As I continued down the trail, the sun came out and made it a pleasure to walk through the dappled old-growth forest on a gentle downhill tread. After what seemed like a long time, I reached Crazy Creek Camp at 4:30, quite tired out. I’ve camped here twice before, so it felt like home. Took a rest, explored a bit, took some photos of the Crazy Creek Falls.

Made Zatarain’s red beans and rice for dinner. It was pretty good but I didn’t make all I had because I wasn’t that hungry. Again did the crossword puzzle, listened to the second half of “Albert.”

The fifth morning was Sunday, so I did morning prayer using the Sunday lessons and thought about what I would preach about if I were in church. The OT lesson was Jeremiah’s call to preach. “The Lord put his word in my mouth,” he said.

Hit the trail about 8:30 because I wanted to reach Five Mile Camp, about 8 miles. After five days, I’m getting tired, and the miles seem to drag. I stopped at Ten Mile Camp at 11:10, kept going, had lunch and a short nap in a burned area down the trail.

The afternoon was a slog, but I arrived at Five Mile Camp at 3:15 and was able to take a good rest. I met a park ranger who was studying spotted owls. He had just returned from setting voice recorders in the woods. He said the barred owls re driving the spotted owls out of this valley. He had a rangy young dog on a leash and a big stash of food he’d left near the river. Made dinner, did the crossword, listened to Act One of Macbeth. There was really good voice acting in this production, and I had to listen to some Beethoven piano sonatas to get my mind off the murders in the play before slipping off to sleep.

I awoke feeling kind of creaky on the sixth morning. Did morning prayer, had breakfast and hit the trail by 8:15 or so. Started up the switchbacks to Big Hump. Made pretty good progress, but felt really tired. Took a break on the big rock outcropping and texted Katy. Continued on down the switchbacks t the river, then rested at the campsite by the river where I’ve camped before.

Kept slogging along and got to Little Hump by noon, when’s I stopped for lunch. My lunches consisted of wheat crackers, peanut butter in a tube, cheese, raisins, and a piece of chocolate. The wheat crackers were excellent when I began, but by the last day they were soggy. The cheese and raisins were my favorite part of lunch.

I came out into the trailhead parking lot at 1:15. When I dropped the car off, I forgot about the Forest Service fee for parking, so when I got back, it had two yellow tickets on the windshield. I groaned, thinking of enormous fines, but it turned out to be only two tickets for $5 each. I can handle that.

Drove to Highway 101, texted Katy that I was on my way, and drove home. Stopped at Quilcene for an ice cream cone and an Americano from the coffee hut. It felt strange driving along and listening to the same old news on the radio. Got home at 2:30, kisses Katy and took a shower. Ahhhh.
Posted by Bill Fulton at 12:47 PM 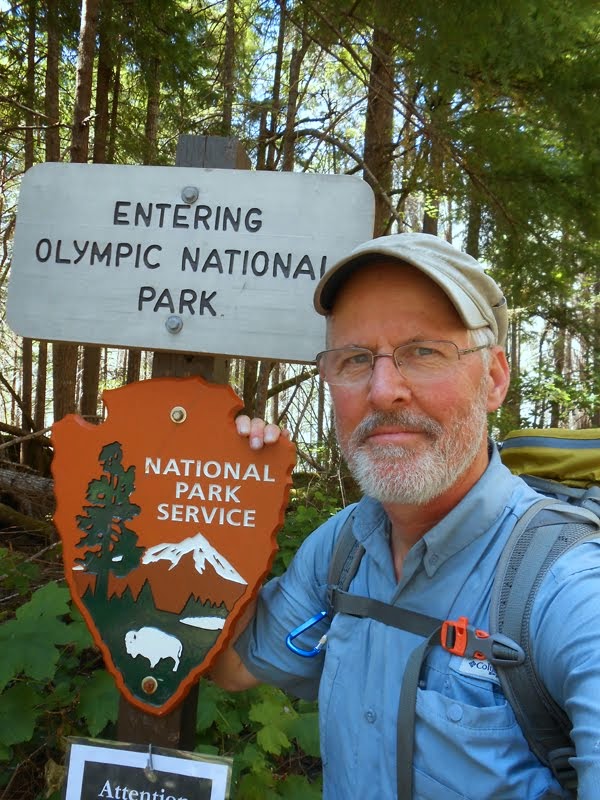 This blog features my hiking trips into the Olympic Mountains near my home. It's a photo journal to remind me of my adventures in the wilderness country.